Athletic Club Bilbao goalkeeper Iago Herrerín wants to find a new destination before the window closes, and Monday’s edition of AS believes it could be Crystal Palace.

It’s stated the player’s future ‘points to the Premier League this week’, with the insinuation that a transfer could happen quickly.

The 32-year-old wants to be first choice, yet it’s very questionable he would be so should he sign for Roy Hodgson’s side.

At the start of the summer window there was insistence in Spain that Vicente Guaita could be returning to La Liga, with it taken as fact that he was keen on a move. Crystal Palace weren’t of the same opinion, and it would take a big leap for them to be so now.

Guaita is settled and has proven he can be a key player for the London club, so selling him and signing Herrerín would represent as huge gamble at the start of the season. 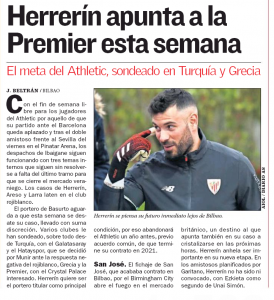 That’s the only way Herrerín would be first choice, with it very unlikely he’d push past his compatriot.