It would appear Barcelona thought signing Eric Garcia would be rather easier than has proven the case.

Despite all the bravado about pressure being on Manchester City, and Barca being quite happy to take the defender for free when his contract ends in June, it would appear there’s now growing annoyance.

Monday’s edition of Mundo Deportivo, a Catalan newspaper, says €20m for a player who has ‘barely played a dozen games’ and whose contract expires in less than a year is ‘outrageous’.

Should Manchester City not lower their demands then Barcelona will sign another emergency option to see them through the season, with worries over Samuel Umtiti’s fitness now feeling permanent.

Mundo Deportivo say City are actually asking for a package worth €30m, with the €20m fixed, 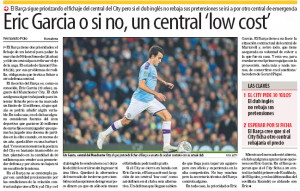 and there’s clearly some shock that they’re currently refusing to budge from that.

There’s still hope that if Pep Guardiola manages to get another central defender signed then the price will change for Garcia, but Barca are clearly now not counting on that.

Defender presented as an ‘option’ for Liverpool – Became a free...