The Dutch media continue to link Tottenham Hotspur with a move for Wout Weghorst.

Following claims from elsewhere in the Netherlands on Sunday, Monday’s edition of De Telegraaf has a big article on the potential transfer. They say Spurs ‘want to sit down’ with the VfL Wolfsburg player, presumably to talk to him about a transfer to the Premier League club.

Spurs ‘plan to recruit’ the striker, as Jose Mourinho searches for someone to give support to Harry Kane over the coming season. There’s ‘plenty of serious interest’ in the player, according to the Dutch newspaper, with Tottenham the only club named.

A move to Mourinho’s side would be a childhood dream come true for Weghorst, insist De Telegraaf. They explain he made it clear a couple of years ago that a move to English football would be very welcome. 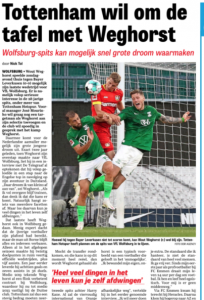 However, an issue could arise when it comes to cost, with it being stated Tottenham would have to pay VfL Wolfsburg a ‘substantial amount’ to get the deal done. Despite that, a transfer to Spurs is described as being ‘very realistic’.

There’s not a great deal on the story in Germany, which would suggest Tottenham want to convince Weghorst and his camp first, before starting difficult negotiations with the Bundesliga club.