American investors Josh Harris and David Blitzer acquired a large stake of Crystal Palace in the December 2015 and the duo, along with Steve Parish, each hold 18 percent stake of the Premier League side.

If reports are to be believed, Blitzer has now set his sights on Belgian side KV Oostende.

According to Het Nieuwsblad, Blitzer submitted a €5.5m offer in January, to take 100 percent stake of the Jupiler Pro League side, but Oostende chairman Franck Dierckens refused for two reasons.

Dierckens wanted to stay on the club’s board with a minority stake and suspected (there was no evidence) Anderlecht owner Marc Coucke was behind the deal.

The newspaper claims Oostende have given themselves a month to save the club from bankruptcy after Hawaii based Pacific Media Group withdrew their interest in taking over.

Oostende are considering three other tracks, including one from the ‘former prospective buyer’.

It’s claimed Blitzer and his Spanish partner Ivan Bravo are showing interest and have offered €1m to take full control of the club. Dierckens still suspects Coucke’s involvement, but Het Nieuwsblad suggests they are the ‘only remaining solution’ for Oostende. 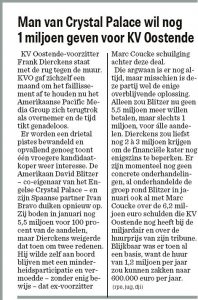 Dierckens, however, would prefer an additional investment of two to three million ‘to somehow limit the financial hangover’.

For now, no concrete negotiations are taking place and time is running out for Dierckens and Oostende.

Everton man has been ‘proposed’ to another club – Sounds like an agent move, Toffees would resist

Everton man has been ‘proposed’ to another club – Sounds like...

“We couldn’t find an agreement” – Agent on trying to snatch...

Club will look to sign Fulham player if club fail with...