Pushed to one side for a while, the rumours surrounding the future of Lucas Torreira have seen some resurgence over the past couple of days.

Mostly, they’ve been kicked off by Marseille’s reported interest in Lazio’s Gonzalo Escalante, whose exit would open up a spot for Arsenal’s Uruguayan in Maurizio Sarri’s side in Italy.

That’s what Corriere dello Sport are reporting on Wednesday, claiming the Ligue 1 side wanting the Argentine has ‘opened a crack for Lucas Torreira leaving’ the Gunners.

In fact, Sarri ‘likes him very much’, but seems to be aware that a departure would be needed before he can have the player he wants for him 4-3-3 formation. 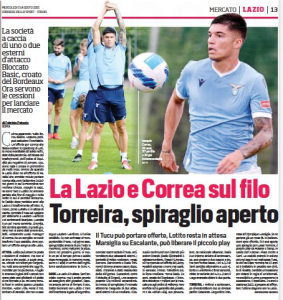 Therefore, Lazio ‘will only take action if it manages the exit of the former Eibar player’.

Torreira is three years younger than Escalante, and ‘is negotiable on loan with the right of redemption’, which would be ‘an opportunity to have a credible alternative to Leiva as regista and prepare his succession’.

So, the Arsenal player’s future rests on that of another for the time being.