While many players on Wednesday night will have a lot to prove and a trophy to play for, for Chelsea loanee Bertrand Traoré, there’s that little bit extra.

Currently at Ajax where he has had a very positive season, the José Mourinho signing will be facing his former manager in Stockholm where he will likely start against Manchester United in the Europa League final.

With 13 goals and six assists to his name in 38 appearances this season, the 21-year-old has attracted a lot of interest, and Lyon in France are very keen on his services.

Considering how vocal Antoine Griezmann has been about potentially leaving Atlético Madrid over the past 24 hours, and Alexandre Lacazette’s not-so-subtle hints about moving to Spain, the Ligue 1 club are likely to have a fair chunk of money to spend in the summer to replace their departing forward. 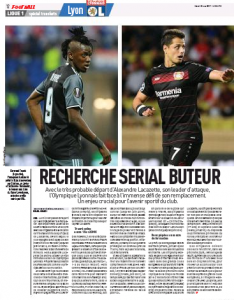 Part of the plan, which logically would involve moving Nabil Fékir in a more central role, could see the arrival of Chelsea’s Bertrand Traoré, even if a significant chunk of money will be needed to convince Roman Abramovich and Antonio Conte to let their starlet go.

L’Equipe on Tuesday in France seem to think a bid of €15-20m could do the trick, and the French newspaper even reveal that contact has already been made with the youngster’s entourage and Chelsea about a potential transfer.

Unless Conte decides he wants Traoré at Stamford Bridge next season (where would he play in his 3421?), Traoré, who wants regular first-team football, could very well be on his way out.

Only time will tell, but we’ll have to wait until the Europa League final to learn more. That’s what’s important for him, right now.