Anthony Martial’s desire to leave Manchester United in January was fulfilled when he was allowed to join Sevilla on a loan deal until the end of the current campaign.

The 26-year-old struggled for more game time with the Red Devils in the first half of the season, and he admitted last month that Ralf Rangnick’s arrival saw him look for a new club in the winter market.

Since arriving in Spain, the forward has had just over 600 minutes of action across 10 matches in all competitions.

In this time, he has managed a goal and an assist in the process.

The Manchester United owned player has failed to find the back of the net or register an assist in the last seven matches, and the player has now detailed the reasons for his slow adaptation at Sevilla.

“Now I feel very well. I was able to recover from the injury, which was a complicated injury that required a reasonable recovery time, but now I’m much better,” he told ABC Sevilla.

“I have been very careful to be able to return and be available to the team as soon as possible, which is why I decided to come to Sevilla.”

“I’m working on it [to show his best version from now until the end of the season]. I came to be able to enjoy football again after a long time without playing.”

“I know I can be at a higher level, and I work for it, but first the injury, then the adaptation to a new club and a new city, is being difficult for me because of the language barrier.”

The France international’s contract at United is until 2024. He was directly asked whether he will continue with Julen Lopetegui’s side beyond this season. 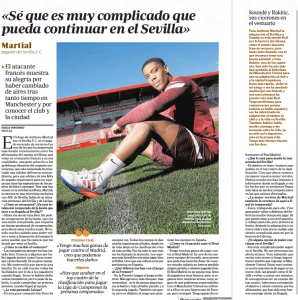 “I see it very complicated to be able to continue at Sevilla. I’m not worried about that right now. I came knowing that it would be six months and then I would surely have to return to Manchester United,” Martial explained.

“I’m very happy with the experience of playing in a new club, as big as Sevilla and having minutes again. If we manage to be a top four team, we will have achieved the goal and I will be happy for the fans, who have been very good to me since I arrived.”