Anthony Martial pushed for a Manchester United exit in the January window, and was allowed to join Sevilla on loan until the end of the current season.

Since making his switch on January 25th, the Frenchman has put together 221 La Liga minutes, along with a further 76 in the Europa League.

He managed a goal in February against Dinamo Zagreb, and an assist in the same month against Elche, and has since faced some time on the sidelines with a muscle injury. He’s returned from that, with minutes against West Ham and Rayo Vallecano, and is yet to complete a full match for his new club.

Seville welcomed Martial with huge hype and he’s yet to live up to really it, but there’s hope he can play and score against West Ham this week, given he had a good record for Manchester United against the London club.

Ahead of the match against David Moyes’ side, the 26-year-old has spoken to the Spanish media.

Asked about his January move, Martial is quoted by AS as saying: “I asked United to leave because I wanted to play. Rangnick arrived and I wanted to leave, so I told him. I needed to find a new atmosphere, a new club. Why Sevilla? I had many options, but I spoke with Lopetegui and Monchi and they made me feel important. I wanted to play and enjoy football again. I wasted some time in Manchester not doing so, and I needed it.”

AS tried to get some gossip from Martial about the Manchester United dressing room, and 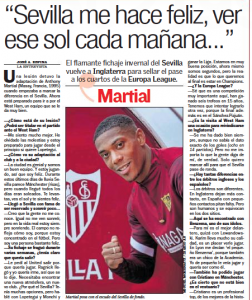 the claims there’s been issues with Cristiano Ronaldo, something the player looked to rubbish clearly: “Cristiano is a top professional, one of the best in history. We all love him, there are things that are said in the media that are not true. I was in that dressing room and I know what happens.”

Enjoying his time in a warmer climate, Martial made it clear he’s particularly fond of the weather: “The city is great and we are a good team. And I’m playing, so I’m happy. During these last rainy days Seville looks like Manchester (laughs), but when I arrived every day was sunny. You get up, you see the sun and you feel happy.”