The Fulham owned player spent the 2019/20 season on loan with the Spanish side, where he made 36 league appearances.

Villarreal had an option to make his transfer permanent for €25m. However, they had no plans of meeting the Cottagers’ asking price, and their idea was to sign the midfielder for a lower fee.

The Yellow Submarine have appointed Unai Emery as their new manager and the former Arsenal coach wants to strengthen his midfield, after the club lost Santi Cazorla and Bruno Soriano.

AS explain the La Liga side’s ‘first idea’ was to buy the Cameroon international and Levante’s José Campaña.

However, Villarreal found out that Scott Parker’s side and Levante demanded a ‘high amount’ to sanction Anguissa and Campaña’s sales. 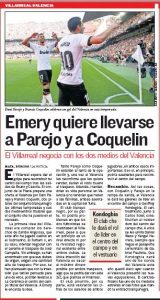 The situation has forced Emery’s new club to look elsewhere in the market, and they have now set their sights on the Valencia duo of Francis Coquelin and Dani Parejo.