Wahbi Khazri left Sunderland and completed a permanent switch to Saint-Etienne in the summer transfer window.

The Black Cats allowed him to join Rennes on a season-long loan deal last season and the forward played a crucial role in helping Sabri Lamouchi’s side seal a berth in the group stages of the Europa League this term.

He left the English club and went out on a temporary move following his then employer’s relegation to the Championship. They were further relegated to the League One and the Tunisian international’s desire not to play in the lower league convinced him to leave Jack Ross’ side.

Rennes wanted to extend his stay by buying on a permanent deal from the English club, but Jean-Louis Gasset’s side successfully managed to beat their league rivals to signing the player.

Today’s edition of French newspaper L’Equipe has an explanation as to how Khazri’s current employer were able to land him, despite facing competition from another Ligue 1 club and with the lack of European competition. 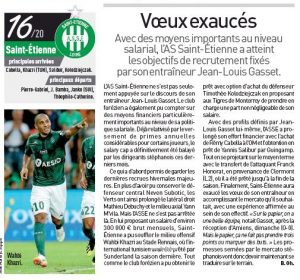 The report claims Saint-Etienne are offering him a monthly gross salary of €300,000 and it was crucial for the 27-year-old to make a switch from Sunderland to Stade Geoffroy-Guichard, instead of Roazhon Park.

It’s a very big wage for Ligue 1, especially outside of the most prominent clubs.