In May, Uli Hoeneß and Karl-Heinz Rummenigge publicly expressed their side’s interest in the Manchester City star.

Last month, Rummenigge stressed his side will hold “concrete talks” with City, if the winger is keen on making a switch to the Allianz Arena.

Mundo Deportivo claims the possibility of Bayern signing Sane is ‘evaporating’ because of €100m asking price and the player’s intention to not leave the Etihad in the summer transfer window.

In addition to this, Pep Guardiola has also stressed the 23-year-old will be at City next season.

The Catalan newspaper explains Bayern have shifted their focus to Ousmane Dembele after knowing they cannot land Sane. 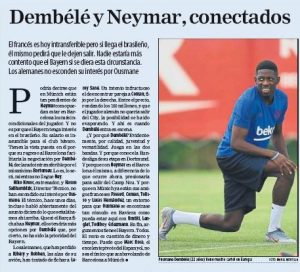 However, their chances of signing the Frenchman will depend on whether or not Neymar will return to Camp Nou.

If the PSG star fails to join Barca, then Dembele is more likely to stay with his current employer.