Athletic Bilbao are working hard to get defender Unai Nuñez signed to a new deal amid interest from Watford.

The 22-year-old defender is highly rated in Spain and has attracted interest from several Premier League teams, including Watford.

They were keen in the summer transfer window, according to El Correo, and that’s led the club’s management to try and extend his current deal.

Nuñez currently has a deal until 2023 which includes a €30m release clause, but the board are trying to extend that to protect them from the interest and even made an improved offer in recent weeks.

However, the player is so far resisting, with his situation described as ‘complicated’ by the newspaper, as a result of a lack of playing time.

He’s managed just five starts in the league so far, with manager Gaizka Garitano struggling to find a place for him in his team, and wants more minutes before committing. 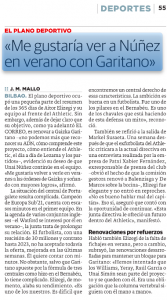 The only chance of that happening is if Garitano switches to a system that uses three at the back, which he has done on occasion, but that seems unlikely.

That could give Watford, who are the only English club named by El Correo, hope of luring the centre back away, although it seems Athletic would resist if they make another approach to take him to Vicarage Road.