To explain it better, let’s start with the claims from the last week, when A Bola said Marco Silva would be keen on bringing Sporting CP player Jefferson to the club.

The Hull City manager has already worked with the left-back at both Estoril and Sporting, and would like to have him by his side one more time.

And according to O Jogo, Sporting will be looking to offload some players in the next transfer window, and Jefferson just so happens to be one of them. 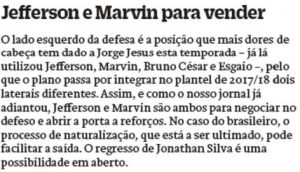 The Portuguese club think they have too many left-backs, and since the player is far from being the first option, Sporting are ready to sell.

It’s not claimed how much Sporting will demand for him, but considering that Jefferson has only 13 appearances this season and has been struggling with injuries, the fee shouldn’t be very high.

A summer opportunity for Marco Silva and Hull City.