As you know, Paris Saint-Germain are interested in Paul Pogba.

The Manchester United midfielder has been linked with a move away from Old Trafford almost ever since he returned from Juventus, with Real Madrid the usual destination.

The French side, however, have overtaken the Spaniard in this race, and yet, despite Pogba only having one year left on his contract, the Red Devils are going to make any exit very difficult.

That’s according to Le Parisien, who make it clear Paris Saint-Germain are going to have to ‘break the piggy bank’ to afford the Manchester United star.

The French newspaper explain the midfielder ‘won’t be able to leave for a fee less than €75-100m’, which is far too expensive for the Ligue 1 side. 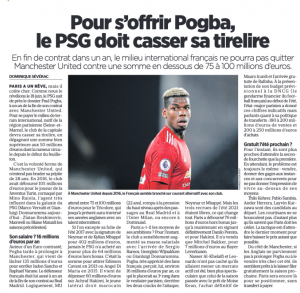 Unless they can offload players like Thilo Kherer, Pablo Sarabia or even former Manchester United player Ander Herrera, Pogba will remain out of reach this summer, which leads to the question of whether they will be able to get him on a free next summer.

Le Parisien explain that if the Red Devils cannot get the Frenchman to sign a new contract, ‘they seem ready to let him leave for nothing next season’.

Rest assured, if that is the case, Paris Saint-Germain will be there waiting.