On July 31st, Sport reported Barcelona have issued an ‘ultimatum’ to Paris Saint-Germain’s Adrien Rabiot. The Camp Nou outfit are interested in the midfielder and they wanted him to make a decision on his future this week.

The front page of today’s edition of Mundo Deportivo has a headline that Chelsea midfilder N’Golo Kante ‘is the key’ for Ernesto Valverde’s side in signing Rabiot. They want him to replace Paulinho, who returned to Chinese side Guangzhou Evergrande.

PSG want the former Leicester City man ‘at all costs’ and his arrival at the club would facilitate the 23-year-old’s move to the Catalan club.

However, the FA Cup winners are unwilling to allow the player leave Stamford Bridge for any amount and that has blocked Rabiot’s move to Barcelona. 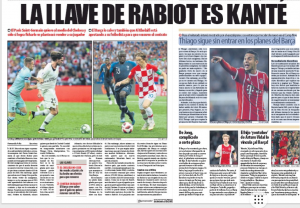 Mundo mentions the Blues willingness to retain Kante complicates Rabiot’s exit from the club, who has one year left on his contract and dreams of playing for the La Liga winners.

PSG want the Ligue 1 star to sign an extension and Barcelona fear the French club’s president, Nasser Al-Khelaifi, could convince Rabiot to agree a new contract by offering a lucrative deal.