On July 31st, Catalan newspaper Sport reported that Barcelona defender Lucas Digne was set to join Everton after ‘rapid and successful negotiation’ and the deal was expected to be completed on Tuesday.

The deal hasn’t been announced yet and today’s edition of Mundo Deportivo claims the France international’s move to Goodison Park should be made official on Wednesday after a delay of a few hours.

Digne is n Liverpool and was seen with the staff of his new club as he has already ‘passed the medical examination’ at the club’s chosen medical centre.

The left-back will put pen to paper on a five-year contract with the Premier League outfit. The Merseyside club and Barcelona have already agreed a deal for the 25-year-old and Everton will pay €20m plus variables to secure the fullback’s signature. 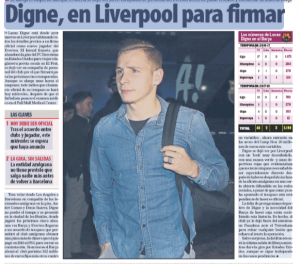 Digne will be another recognised left-back in the squad after Leighton Baines and the former will compete with the 33-year-old for a place in the starting lineup.