Home Europe Club waiting for Liverpool offer to arrive, transfer should be resolved ‘in...
SHARE

Sport have yet another article on Jasper Cillessen and a potential move to Liverpool this summer.

The Dutch goalkeeper has been repeatedly linked with a move to Anfield, mainly by the Catalan media, and the time is coming when something will have to give.

Sport state Barcelona are waiting to receive a ‘supposed’ offer from Liverpool for the player.

Then, Cillessen can decide if he wants to stay where he is, and continue as back-up to Marc Andre ter Stegen, or move to a club like Jurgen Klopp’s who ‘aspire to everything’.

It’s claimed the transfer situation is ‘expected to be resolved in the coming days’ which would give Barcelona time to get someone else in, because they wouldn’t be happy to work with the options they already have. 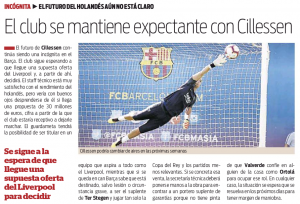 Cillessen, along with AS Roma’s Alisson, has been repeatedly linked with a move to the Premier League club and looks to be the halfway house option.

It’s likely the Netherlands first choice would cost less than half what the Brazilian would, and could be a compromise solution between sticking with Loris Karius and Liverpool’s other options, and breaking the world record fee for a goalkeeper.