Home Europe Manchester United are ‘ready to offer’ £44m for ‘precious piece of the...
SHARE

Ante Rebic to Manchester United claims are spreading around Europe, with the club’s interest in the Croatian now being pushed repeatedly.

Saturday’s edition of AS reported Manchester United are setting themselves up to make an effort for the 24 year old Eintracht Frankfurt player. It had been Tottenham more linked with the Croatian international, but perhaps bringing United in adds some glamour.

A few days we covered claims from Germany’s SportBild which linked both Spurs and Jose Mourinho’s club, adding Arsenal and Napoli to the chase.

That came days after Croatia’s 24Sata newspaper had originally brought Manchester United into the picture, saying both they and Spurs are ‘keen on the ‘Messi from Vinjana Donjih’.

Now Corriere di Verona get involved, because they want to talk up a player who used to play for local club Hellas. They state Manchester United are ‘ready to offer’ £44m for the ‘precious piece of the market’.

This may be all getting a little carried away. From what we can see it’s the Croatia report which kicked off the United claim, and they valued a transfer at €30m. 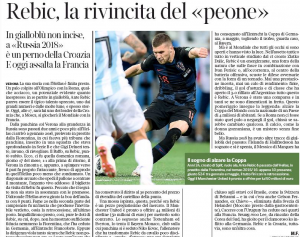 In Germany there’s been a clear eagerness to continue talking Rebic’s value up, with €50m being the figure now pushed. The Croatian has had a good World Cup, but perhaps not quite good enough to see his value soar so much.

A goal today could send everything into the stratosphere.