Although some outlets act as if the Premier League transfer window would also be closing for departures today, Portuguese newspaper O Jogo is pretty chilled about it.

As they report Benfica’s chase for a right-back this Thursday, it’s claimed that there’s no rush to make a move for the Manchester United player Matteo Darmian.

O Jogo says that the Italian is one of the Eagles’ targets for the position, but requires some financial effort which the Portuguese club are still not certain about doing. 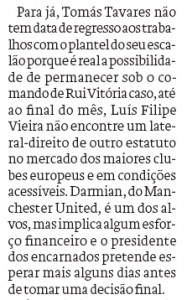 That’s why Benfica president Luis Filipe Vieira will still wait for a few more days before taking a final decision on the case.

Of course losing a player when you are not allowed to replace him is not the ideal scenario for any English club.