With news from Italy emerging that West Ham could be close to signing Carlos Sanchez from Fiorentina, it’s unlikely that we’ll see the Hammers bringing in another midfielder on Thursday.

Our guess, though, is that the Colombian wasn’t their first choice, as Maxime Gonalons story refuses to disappear, suggesting he might have been the man they wanted instead.

However, Corriere dello Sport explain the former Lyon captain moving is unlikely to happen, as he’s told AS Roma he isn’t interested in leaving the Serie A side.

Of course, anything can happen on transfer deadline day in England, as Gazzetta dello Sport point out there is a chance the defensive midfielder still “could” make a move to West Ham at the last minute. 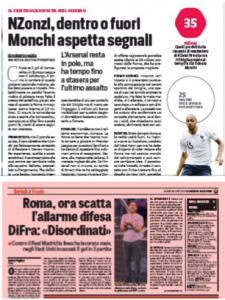 Considering Crystal Palace and Everton also tried and failed to convince the Frenchman earlier this month, and West Ham appear to have found an alternative in Carlos Sanchez, our guess is it won’t happen.