With both Milan and Napoli enquiring for his services, Dejan Lovren is a wanted man in Italy, but no offers have reached Liverpool just yet.

Their reported demands of €20m for the Croatia international appear to have put suitors off for now, forcing them to look elsewhere for more viable targets.

Napoli decided to pay the €36m for Kostas Manolas, while Milan are still on the lookout for their man all the while keeping Lovren’s name on their list just in case.

However, according to Corriere della Sera’s Rome edition, a new kid is on the block, and that’s AS Roma. 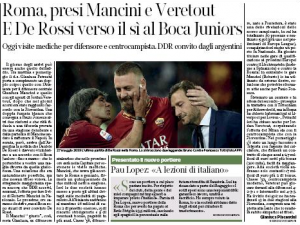 Following their unsuccessful attempts to reduce Tottenham’s asking price for Toby Alderweireld, the Italian side have reportedly turned their attention to Liverpool’s Lovren, as the newspaper claim they have ‘taken information’ about the 30-year-old.

That normally means they’ve reached out to the player’s agents to find out if the player would be interested in a move and, if so, how much a transfer would cost.

No detail is given about the answer they received, but previous reports suggest €20m would do the trick, a fee they were prepared to pay for the Tottenham centre-back.

Now we’ll have to wait and see whether they think paying that much for the Liverpool defender is worth it, because some would argue one is better than the other…