Despite repeated reports that Manchester United will only go for Sergej Milinkovic-Savic if they sell Paul Pogba, Il Tempo decide to jump the gun on Wednesday by suggesting the Red Devils have the offer ready to go.

This all comes amid claims Paris Saint-Germain are also pushing for his signature, and the Ligue 1 champions will ‘need to accelerate’ if they want to beat the Premier League club.

According to Il Tempo, ‘over the past few hours, Manchester United have put together an offer to present Lazio’, which is described as ‘oscillating’ between €80-90m.

Quickly looking at Il Messaggero’s take on the situation, that should be enough as they claim €90m would do the trick, but Il Tempo explain Claudio Lotito continues to ask for a nine figure sum, even if a small discount could be achieved. 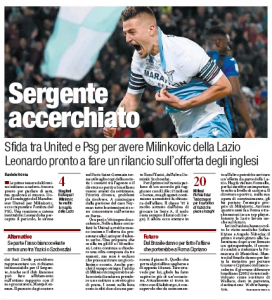 The problem here is that Manchester United can put together all the offers they want, but until they actually present Lazio with an official bid, this is all futile.

Once again, this sounds like a claim in the hope it triggers some action, especially if Paris Saint-Germain are looking at the Serbian midfielder.

You know, the standard ‘hurry up, another club is interested and could beat you if you’re not careful’ article we see plenty of every transfer window.