Having failed in their attempts to convince Arsenal to sell them Granit Xhaka, AS Roma are having to look elsewhere to bolster their midfield.

Names such as Teun Koopmeiners have emerged, but one closer to home has started appearing as well, that of André-Frank Zambo Anguissa.

The Fulham midfielder, who arrived as part of the huge summer following promotion to the Premier League in 2018, has finally settled in London following a good loan spell with Villarreal, and was a near constant under Scott Parker at Craven Cottage.

With the Cottagers back in the Championship, an exit has been touted this summer for the Cameroon international, with AS Roma now a potential destination. 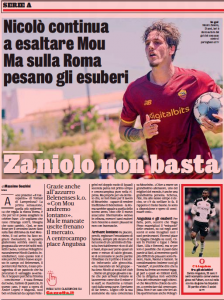 Gazzetta dello Sport have the information, claiming that any transfer away from Fulham would cost the Serie A side ‘around €25m’.

However, there’s hope that because of his relatively young age (25) and the length of his contract (2023 with an option for an extra year), a package could be put together to spread any payment over a longer period.

We’ll have to see if Fulham decide to accept anything of that ilk, but we’ll be keeping an eye on this.