Fotomac report Galatasaray are looking to sign Tottenham Hotspur forward Fernando Llorente and that they will do everything they can in order to secure the player’s signature.

It’s claimed Galatasaray manager Fatih Terim has asked the club’s board to sign the 33 year old as he believes Llorente’s style is suited to the Super Lig.

The Turkish media have been insistent that Cim Bom want to bolster their attacking options.

The former Swansea City player is struggling for minutes under Mauricio Pochettino with the Argentine coach preferring the likes of Heung Min Son, Lucas Moura, and Eric Lamela as support to Harry Kane.

According to the Turkish newspaper, Olympiacos are also interested in the Tottenham player and Galatasaray are looking to beat the Greek giants in order to get him.

It’s reported Galatasaray are looking to sign him on a free transfer when the Spaniard’s contract with the Premier League club expires next summer. 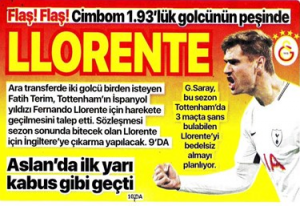 Llorente has made 39 appearances for Tottenham since joining from Swansea City and scored 6 goals.

Talks on a free transfer can begin in a week’s time.