Fanatik report Galatasaray are in talks with Manchester City’s Fernandinho as they look to sign another midfielder in this transfer window.

It’s reported the Super Lig club’s fans are working extremely hard to convince the Brazilian over a move to Istanbul, and his Instagram account has seen ‘Come to Galatasaray’ messages.

The Turkish newspaper hasn’t given any indication whether Gala are making progress or not, but they do state they have genuine interest in the Manchester City star.

Fernandinho has been a key player since Pep Guardiola took charge of Manchester City, but given his age his role in the team may be reduced this season. 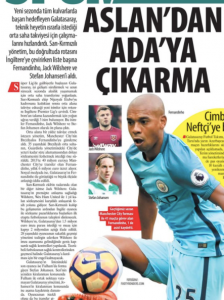 The 35-year-old has made 224 Premier League appearances for City since joining the club from Shakhtar in 2013, scoring 18 goals.

His contract at the Etihad Stadium will expire at the end of this season.

Subsequently he can speak to other clubs in the new year with regards to a pre-contract agreement.