The fact that Lucas Torreira is now called a ‘leader’ for Fiorentina is probably enough to show that the midfielder’s loan spell from Arsenal has been quite successful, with his permanent move to La Viola sounding nearly certain.

The Serie A side’s intention to buy the 26-year-old this summer isn’t a secret, as it’s now a matter of when. Regarding their plans, newspaper Corriere Dello Sport shares an update today.

According to the outlet, Fiorentina’s officials have been working on the purchase ‘in the past few weeks’, and are now set to ‘accelerate’ the operation in the coming days.

La Viola are set to sign Torreira from Arsenal on a deal worth around €15m, with the midfielder signing a four-year deal with them. 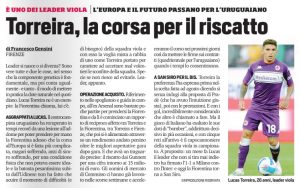 As usual, Torreira gets much praise from the local media, with Corriere writing that the Italian game only ‘enhanced his qualities’.

The midfielder, who joined Arsenal in a €28.6m move from Sampdoria back in 2018, is set to leave the Gunners for good with 89 appearances for the club.