Alvaro Morata is planning to leave Chelsea and return to Spain in the winter market and the striker has been offered to Barcelona, while Marca reported that he also sees a move to Atletico Madrid with good eyes.

Today’s edition of Mundo Deportivo has two updates about the 26-year-old.

The first one has a headline ‘Morata, first option’ for the La Liga winners, who are in search of a new No 9 following Munir El Haddadi’s exit.

It’s explained that late on Wednesday, the former Real Madrid man was the first option to join the La Liga winners, but no deal has been closed for the player, who is also on the radar of the Europa League winners.

The economic conditions for the deal to take shape have restricted the Blaugrana from giving the green signal as they still continue to the idea of bringing the Blues frontman either on loan or a transfer with lower economic conditions. 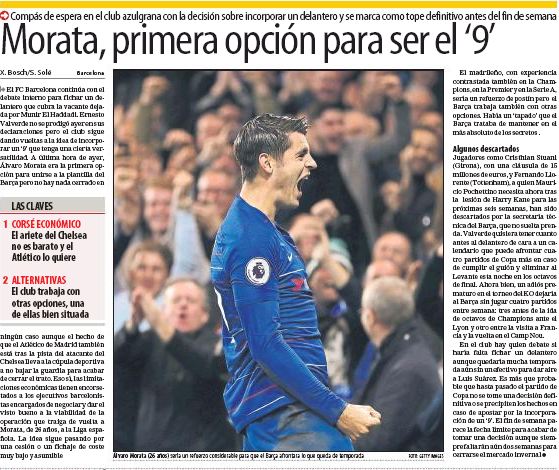 Journalist Miguel Rico, writing on the last page of the Catalan newspaper brings the second update on Morata. He claims that there is more interest from Barca in the Spain international than shown by the sporting leaders.

Rico explains that if Barcelona sign Morata, he can be an option for ‘present and future’.

The attacker could be considered as a long-term successor for Luis Suarez at the Camp Nou, while playing as a deputy for the time being.

Reports in England and Italy claim that Chelsea have agreed a deal with Juventus for Gonzalo Higuain and his arrival at Stamford Bridge should speed up Morata’s exit from the club.

The question is which club will he join in January?