Porto are ready to make a permanent move for Liverpool midfielder Marko Grujic as Sergio Oliveira nears a departure.

That’s according to A Bola, who say Grujic wants the permanent switch to the Portuguese giants, and they are keen to make it happen.

The newspaper explains that the club’s board of directors are waiting for Oliveira’s departure to be made official before they start negotiations with Liverpool about a deal.

Grujic spent last season on loan with Porto and was the most successful of a trio of players to arrive from England.

In all, he managed 39 appearances and scored two goals, and his displays in those games were enough to convince both his manager and the board to make another move for him.

Initially, Porto wanted another loan deal, but Liverpool’s desire to raise money for their own business this summer means that is not an option.

So work is now underway to find a permanent exit for Grujic, who has made it clear to Porto and his agents that he wants a return there ahead of anywhere else.

Liverpool are more than open to a sale and have already received messages from Italy and Germany about a potential move.

Indeed, Hertha Berlin have already started the auction off with a bid of €13m, which is below what the Reds are looking for. 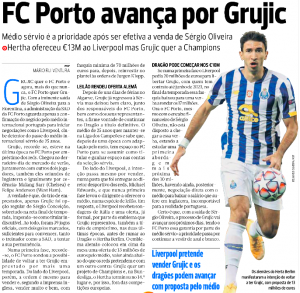 They were first trying to get €20m but have reduced that to €17m, a price that Porto, even with Oliveira’s sale, are ‘not willing to reach’.

They are instead looking at a deal ‘closer to €10m’ and will also have to reach an agreement for Grujic to lower the wages he currently earns at Liverpool.

Liverpool being willing to accept such a sum seems unlikely given they want €17m, but ‘the process’ for Grujic is expected to move forwards in the coming days because Porto already have ‘assurances’ from him that he’ll make the move.