Over the past week or so, there have been countless reports on Barcelona’s interest in Leeds United star Raphinha.

On the front page of today’s Mundo Deportivo, ‘agreement with Raphinha’ is splashed in bold letters. Inside the report, it’s detailed there is an agreement between the two parties and the winger’s arrival at the Camp Nou ‘only depends on Leeds’.

Ousmane Dembélé’s contract with the Catalan club expires in June and Joan Laporta has admitted it is unlikely he will continue beyond this season.

Barca have been working to find a replacement for him and as it stands, the player with most chances to join them is the Whites attacker.

The Spanish club follow him ‘very closely’ and received excellent reports about the 25-year-old. He has also convinced the club’s coaching staff and the Blaugrana have close ties with his agent, Deco. 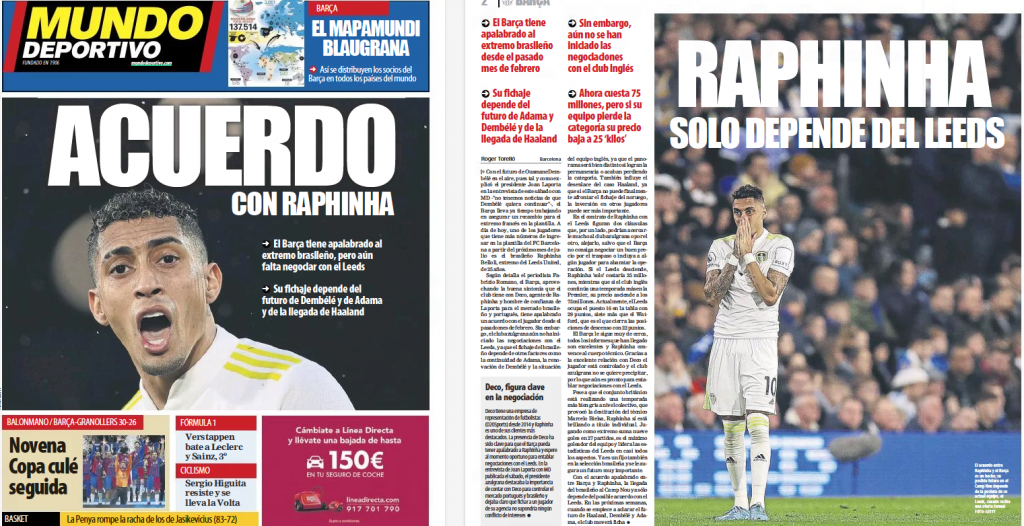 Despite all this, Barcelona do not want to rush for the transfer and feel it is ‘still too early to open negotiations’ with Jesse Marsch’s side. It’s stated they have not yet held talks with Leeds for the Brazil international.

The Catalan club are waiting to sort out the future of Dembélé and Adama Traoré [on loan from Wolverhampton Wanderers with an option to buy]. They also want to see if they could be able to sign Borussia Dortmund’s Erling Haaland.

Mundo state that once the situation with the aforementioned trio is clarified in the coming weeks, the Blaugrana will make a move for Raphinha.

With an agreement in place between Xavi Hernández’s side and the South American, the latter’s arrival at Barcelona now ‘only depends on the possible agreement’ with Leeds.