A month ago, we relayed news from Spain that Arsenal are one of the ‘important clubs’ to show interest in Marco Asensio.

It was also explained the 26-year-old doesn’t want to sign a new deal with Real Madrid, if they were not to offer an improved contract.

His contract expires in 2023 and Sport now state the forward is of the belief he ‘deserves an upgrade’, considering the role he has had for Los Blancos.

The Spain international receives €9m gross per year and the La Liga side have presented him a proposal that includes the same salary, plus additional bonuses which could reach €1.5m.

This offer does not meet his economic requirements and it’s claimed Carlo Ancelotti’s side are ‘not going to accede’ to the former Mallorca man’s wishes. 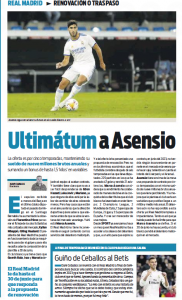 Real Madrid seem to be aware of the Gunners’ interest in the player.

Taking this into account, if he were to refuse the renewal offer, the Madrid club will have ‘no problem’ in making him available in the next market.

The newspaper explains Real Madrid have set a deadline of June 30th for Asensio to accept their offer and if not, he will be made available for sale in the summer.

Arsenal are interested in the Spaniard and this report would indicate that Mikel Arteta’s side can only sign him after June.