West Brom are looking good for promotion to the Premier League, second in the Championship to Leeds United, but only on goal difference.

Both sides are nine points clear of Brentford and Nottingham Forest, who take third and fourth place, and will be hoping to make the jump automatically rather than through the Play-Offs.

A big part of West Brom’s success has been Matheus Pereira, who they took on loan from Sporting. There’s been some regret in Portugal about the Lisbon club missing out on the player’s best form, and that’s voiced again today by O Jogo.

Along with Misic, who is on loan at PAOK, it’s stated both could help Sporting in the second half of the season, however, they’re ‘preparing to say goodbye’ and are now lost to the club.

West Brom have a €10m option to make the signing permanent, and that becomes 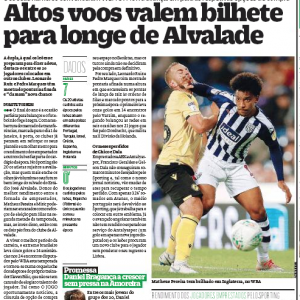 automatic once 32 matches have been played by Pereira. There’s absolutely no doubt in Portugal that the Baggies will be using the option, so Sporting have no say in the matter.

This could impact the way the club structure deals in future, with perhaps a desire to put higher clauses in, or at least further payments on a bonus basis.

Record also cover the move today, reporting West Brom will likely pay the money at the end of the season and that there’s no chance of a discount.

‘There is Nottingham Forest’ – Interest in defender backed up, can make him ‘superior proposal’

‘There is Nottingham Forest’ – Interest in defender backed up, can...

Player has ‘screamed’ exit demands at Moyes and West Ham –...

Player ‘hesitating’ about signing for Everton – Toffees ‘putting pressure’ to...