Home Premier League Arsenal Club working to sell player to a PL side – Arsenal only...
SHARE

Atlético Madrid are ready to sell Thomas Lemar this month to fund a move for a new striker, and Arsenal is a potential destination for him.

The Spanish side are keen to add a striker to their squad in the winter transfer window, having lost Diego Costa to injury.

Edinson Cavani and Paco Alcácer are at the top of their wishlist, but they will need to sell to fund a move for either striker.

That has led them to look at who they can get rid of, and Lemar is the one they have designated as the sacrifice according to Marca.

The Frenchman has struggled at Atlético since arriving in a £63m deal from Monaco in 2018 but a sale this month would ‘provide the necessary salary gap’ for Atlético to sign either of their desired strikers.

As a result, the club’s ‘most trusted agent’ Jorge Mendes and CEO Gil Marín are already working on getting him out of the club.

They are aware it will not be easy to find a buyer for Lemar, particularly as the club are keen to ‘recoup the bulk’ of the money they paid to sign him.

They view the English market as their best hope, and Arsenal ‘already sounded like a possible destination’ for the Frenchman.

The Gunners were linked with Lemar towards the end of last month, with it believed Mikel Arteta is keen to add reinforcement to Arsenal’s midfield. 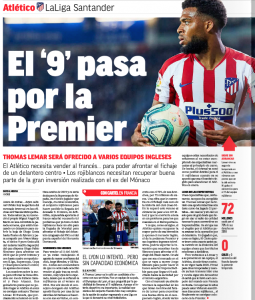 Whether they’d be willing to pay Atlético’s price, which is likely to be high, is unknown at this stage.

However, with the Spanish side’s determined to sell it seems there is a deal there to be done should Arteta really want Lemar at the Emirates this month.

Arsenal are the only club named by Marca.