Inter Milan may be able to make a double deal with Chelsea this summer, according to claims from the Italian media today.

Newspaper Tuttosport brings one of their big stories covering all of a club’s transfer plans, and the Nerazzurri seem interested in signing two players from the Blues.

The article mentions talks for the move of Emerson Palmieri, for whom Inter Milan have been negotiating for a while. It’s said the club have ‘accelerated’ their pursuit for him and got a ‘yes’ for the player.

But the Serie A giants don’t want to stop there, since they’ve never lost track of another long time target, Olivier Giroud. 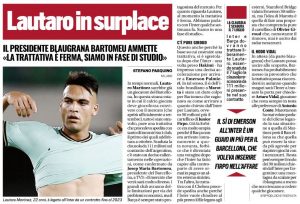 Tuttosport claims that Inter Milan’s intention would be to make a bid for both players at once. Even though the Frenchman has signed a one-year extension with the Blues, the move is still seen as possible.

The newspaper doesn’t say how much Chelsea would demand or Inter Milan offer for the duo.