Last season Pau Lopez made 36 appearances for Espanyol, racking up over 3000 minutes. It was impressive and important for a young goalkeeper and many expected that situation to continue.

Former Watford manager Quique Sanchez Flores had other ideas, and in July he made 30 year old Roberto his first signing, and gave him the No.1 jersey. Espanyol paid €3m for the goalkeeper and Pau’s nose was pushed a little out of joint.

Then Tottenham came in with a loan offer for the player, with a view to a permanent deal, but Espanyol wouldn’t agree until they had a new back-up in. On August 31st, they agreed a loan deal for Diego Lopez from AC Milan, with the Italian club picking up part of the goalkeeper’s wages. 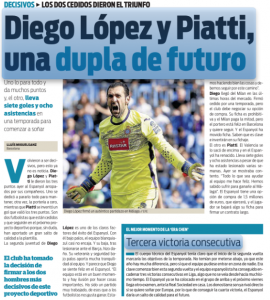 Since then Diego Lopez has been like a man reborn and the number one spot is firmly his. Spanish newspaper Sport report that Espanyol want the 35 year old to continue with them as their first choice and will work to make that happen, Roberto would continue as second choice.

That very much underlines that Espanyol aren’t expecting Pau to return from his Tottenham loan. Mauricio Pochettino’s men have a buying option, with Espanyol due compensation if they don’t take that up. The permanent deal becomes automatic with certain goals reached, but with Pau yet to play a minute of football for Tottenham, it could be left down to choice.

Pau Lopez has Hugo Lloris and Michel Vorm in his way at Tottenham, which sees him firmly third choice. Espanyol have clearly moved on and expect the permanent move, but in order to progress Pau will need to play football somewhere.