At the end of the transfer window it was claimed that Chelsea had a sudden, and strong, interest in signing Antonio Candreva from Inter Milan.

Antonio Conte was said to be the man behind the pursuit of player, and he thought the 29 year old could improve Chelsea’s squad, although he’d certainly have had a tough task to get into the team.

The claims, despite not being the most convincing, have stuck around and over the weekend Gazzetta dello Sport published an article on the player, and of course mentioned Chelsea interest in him. 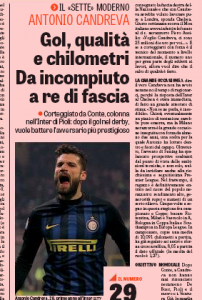 Ausilio and Inter Milan knocked Conte back, which makes them look strong and determined, and gives a clue as to where all this may be coming from in the first place.

Chelsea’s quiet transfer window was something of a surprise, given Conte’s historic love to strengthen his team, and the club going for a Premier League title. Perhaps he’ll have more luck in the summer.