César Azpilicueta’s contract at Chelsea will expire at the end of the season and the west London club have an option to further extend it by a year.

Earlier this month, Sport reported the Blues have not been able to trigger this option due to the current restrictions imposed on them. As things stand, they cannot make new signings or renew contracts.

Ahead of Chelsea’s Champions clash against Real Madrid on Wednesday, AS names the 32-year-old as the ‘essential man’ for the European champions. They have also managed to get a comment from his former teammate, Oriol Romeu, who is now at Southampton.

“He has a perseverance and a way of working on a daily basis that I have not seen in anyone in my career. He knows his virtues, works them to the fullest and exploits them. That is why he has reached the level he is at, there is no other secret,” Romeu said.

The newspaper also spoke to José Antonio Camacho, who managed the defender from 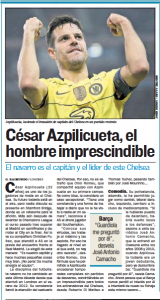 He stated Pep Guardiola asked about the Spain international when the current Manchester City manager was at Barcelona.

“If you had put him as a striker, he would have driven the defenders crazy. Guardiola asked me about him,” Camacho said.

After relaying comments from Romeu and Camacho, AS then explain about Barcelona’s interest in the Chelsea captain.

It’s claimed the Catalan club ‘never lost interest’ in Azpilicueta and they ‘will try to sign him again’ in the summer window.