The Turkish media outlet say Besiktas may look to strengthen their squad in January after drawing Bayern Munich in the Champions League knockout stages, and the Arsenal star is an option

Giroud has yet to start a game in the Premier League for Arsenal this season, and the French striker could be looking to get regular games ahead of next year’s World Cup. 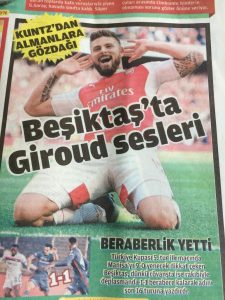 However, Besiktas’ pursuit of Giroud will depend on whether Tosun leaves the Turkish champions in the new year after being linked with a move to Newcastle United in recent months.

Newcastle United tried to sign the Turkey international in the last window, with recent reports they are lining up January bid for the 26 year old.

Tosun has been key in Beskltas’ Champions League campaign, and the Turkish side won’t want to lose him in the next window to Newcastle United or anyone else.

However, Arsenal’s Giroud could be the ideal replacement if he does move on.