Fanatik report Yeni Malatyaspor are looking to keep Aboubakar Kamara and that they’ve made their first offer to Fulham for the Frenchman.

Kamara joined Yeni Malatyaspor on loan during the last winter transfer window which was one of the highest profile signings the Turkish club has ever made.

After securing Europa League qualification, they’ve started their transfer business for next season and their manager Sergen Yalcin wants Kamara in his team for the next campaign.

Subsequently the Super Lig side have made it one of their priorities to get a deal done with Fulham.

Yeni Malatyaspor have reportedly offered a €1.5m loan fee to Fulham to keep Kamara and they’ve reportedly already reached an agreement with the player on personal terms.

Despite high expectations, Kamara only scored 1 goal for the club in 13 appearances, but wasn’t helped by injuries. 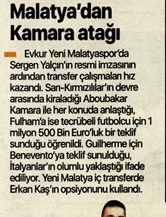 Due to his disciplinary problems at Craven Cottage last season it’s likely Fulham will be looking to offload him this summer.