According to Turkish newspaper Türkiye, Fenerbahce will make a move for Newcastle United striker Joelinton in the coming days.

The Turkish side are in advanced talks with Lazio over the sale of Vedat Muriqi and it’s reported they are looking to replace him with the Newcastle United man.

Fener have been heavily linked with Israeli striker Eran Zahavi in recent weeks but Türkiye report a deal for the player is now unlikely, and they are now looking to sign Joelinton instead.

It’s reported Fenerbahce’s technical staff see similarities between the Newcastle United attacker and Muriqi, so they believe the Brazilian striker could be an ideal replacement. 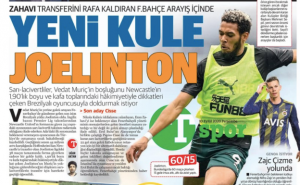 Turkiye claim a loan offer could be submitted for the player in the coming days, but it’s believed that this would be a very hard transfer for Fenerbahce to pull off.