Nélson Semedo is one of the right-backs currently available at Barcelona, and the Catalan club are planning for his exit this summer.

That’s what Marca are reporting on Friday as they state there are unnamed clubs who are willing to invest around €40-50m to land the Portugal international.

It’s claimed the La Liga side have already started looking for a replacement and identified Arsenal’s Héctor Bellerín as an option.

The defender joined the Gunners from Barca in 2011, and has been linked with a return to his former club repeatedly over the years.

He’s still on the Blaugrana’s radar, and according to the report, Ronald Koeman’s side made ‘contact’ with the player to find out the fullback’s situation and conditions to sign him in this window.

Barcelona’s idea is to take Mikel Arteta’s right-back on a loan deal and take care of his full wages during his temporary stay at the Camp Nou. 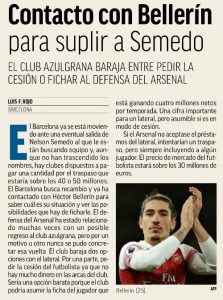 Bellerín earns €4m net per season at Arsenal, and although it’s an ‘important figure’ for a fullback, the Spanish giants can afford it, if he arrives on a loan deal.

Should Mikel Arteta’s side reject this formula, which seems very likely, Barca will then try to sign him on a permanent transfer, but ‘always including’ one of their own players as part of the deal.