The right back joined Kasimpasa on a loan deal during the winter transfer window, and Takvim report he’s now a target for Fenerbahce.

Fener will be parting ways with Mauricio Isla when his contract expires at the end of the season, and according to Takvim, they want to replace the Chilean with the Huddersfield Town man.

Hadergjonaj was linked with a move to Fenerbahce prior to his move to Kasimpasa and reports suggested at that time they were looking to use the influence of his international teammate Vedat Muriqi. 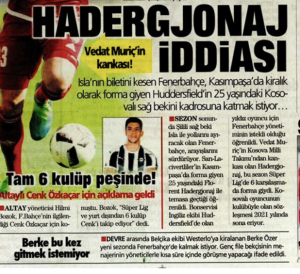 Takvim add Fenerbahce are currently waiting to see how the season will evolve and they could make a move for the player once the campaign has been completed.

Hadergjonaj has made six appearances for Kasimpasa this season, and his contract with Huddersfield Town will expire at the end of June 2021.