Sporting have a plan to sell William Carvalho before the end of June, report Record on Saturday. That’s as long as they get the transfer fee required, a figure which currently stands at €30m.

West Brom are one of the sides being targeted to come up with the £25m+ fee, and are directly mentioned by Record. The Portuguese newspaper also reference Manchester City, although that, again, seems to be entirely based on Carvalho’s agent being Pere Guardiola.

Sporting are again in a tight financial situation and are looking to offload a star or two to balance the books and provide some money for other reinforcements. Carvalho is a prime candidate, but Sporting’s eagerness to sell is doing little for perceptions. 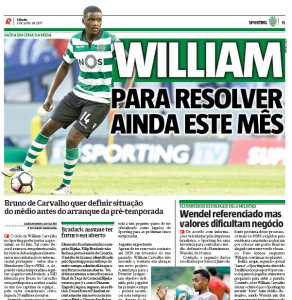 Once seriously linked with moves to Arsenal, and other top European clubs, the interest in Carvalho has reduced, which doesn’t say a lot for the success of his agent change.

Tony Pulis himself has revealed West Brom interest, but whether they’d be prepared to go over £25m for the player is the big question.

It’s not impossible, but the most likely answer to that question is NO.