Saturday saw claims come from the English media that Tottenham Hotspur are making a late attempt to sign Emerson from Barcelona.

Mundo Deportivo have chased up the claims, and they state that Barca are insistent they won’t be letting the right-back leave this summer, unless a ridiculous offer arrives for him. Ronald Koeman rates the player and doesn’t want to see him depart this window.

The Catalan newspaper also contacted Emerson’s entourage, who told them there had been an offer from a Premier League club, without naming Tottenham specifically, but that Barcelona had rejected it.

As far as Mundo seem concerned, that offer was from Spurs.

Emerson himself hasn’t been keen on an exit, and it’s explained that his position hasn’t changed and he doesn’t want to leave Barcelona behind. Reading between the lines, it 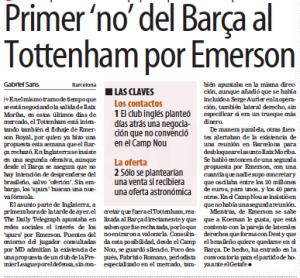 doesn’t appear that his agents are pushing for a move either.

Given all of that, Tottenham would have to be very convincing indeed, both to Barca and Emerson, if things are going to change in the coming days.