Fotomac claim Galatasaray have held talks with Fulham with regards to signing Jean Michael Seri and the Championship club reportedly want €10m for the player.

The Ivorian had a slow start to his Galatasaray career after joining the Super Lig club on a loan deal last summer, but in the second half of the season he’s established himself as a key player in Fatih Terim’s team.

His good run of form has led to talk of him staying at the Turkish club, and Fotomac report that Gala officials have held initial talks with Fulham about the player.

It’s claimed the Championship side would like to keep Seri in their squad if they manage to return to the Premier League but if they remain in the second tier, then they will look to part ways with the player permanently. 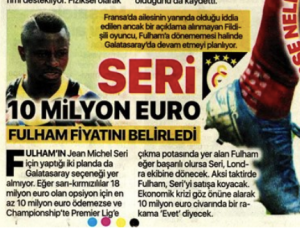 The 28 year old has made 29 appearances for Galatasaray this season in all competitions, and scored one goal. His contract at Craven Cottage will expire at the end of June 2022.