On December 23rd, we carried a report from L’Equipe, who explained Boubakary Soumaré could leave Lille in the winter market, with Tottenham Hotspur as a possible destination.

The French newspaper also reported the Ligue 1 side will need a minimum of €50m to sanction the 20-year-old’s sale in January.

Monday’s edition of L’Equipe claims Lille have received offers from Spurs, Wolverhampton Wanderers and Newcastle United for the midfielder.

Lille are open to the idea of allowing Soumaré to leave this month, but any approach from Spurs, Wolves or Newcastle is facing difficulties.

Soumaré sat down for an interview with L’Equipe and they asked him if there is any chance for him to leave Lille this month.

Responding to that, he said: “I don’t see myself leaving. I feel good here. I’m learning, we have high goals, like the Champions League. A departure is not on the agenda.”

“I want to do a full season, yes. I’m not saying I hold a position, but the place I have today, I went to earn it with my work, I won it. I can’t see myself leaving without having seen this through.

“I feel good, my teammates are helping me. Now is not the time to leave. I don’t want to leave with regrets.”

When further questioned if he has discussed about his plans with Lille, Soumaré said: “Yes, of course, I have already discussed with the coach (Christophe Galtier). I told him very clearly.

“I have a very clear idea of ​​where I want to go in my career. I know where I am today. And that suits me.” 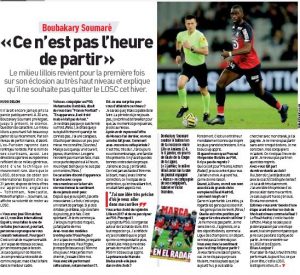 With Soumaré expressing his desire to continue at Lille at least until the end of the season, the likes of Tottenham, Wolves and Newcastle may have to wait until the summer to acquire his services.

Soumaré also made clear he doesn’t want to be compared to other players.

“I don’t have role models. I look at all the great ones. Paul Pogba, I have great respect for the man and the player. But I’m making my way, I’m trying to be me,” he added.