Nottingham Forest signed Chema Rodríguez from Levante in the final days of the summer transfer window.

The 27-year-old’s decision to join the Championship side hasn’t gone well so far as he’s made only seven starts in the league this season.

Wednesday’s edition of AS has an update on the centre-back and they state the Segunda División side have closed a deal with the player.

They also state Almería have finalised an agreement with Nottingham Forest for Chema’s transfer.

According to the report, only an official announcement in now pending from both clubs. 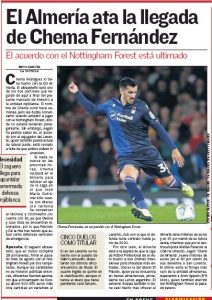 It’s claimed the defender’s name cropped up at Guti’s side a few weeks back after he failed to feature regularly with the English club.

AS adds Chema will be one of two signings at Almería in January, but the report doesn’t make it clear if they’ll take the player on loan or as a permanent transfer.