There appears to be some confusion at L’Equipe over who actually made a bid for Axel Disasi.

Early on in the transfer saga surrounding the 22-year-old’s future, Southampton and Arsenal were said to be the interested clubs in the Premier League.

However, out of nowhere, the French newspaper claimed Wolverhampton Wanderers had come forward with a €15m bid.

Since then, though, there’s barely been a peep about that offer, and Wolves haven’t really been mentioned in articles about the centre-back.

Southampton, on the other hand, have.

On Wednesday, La Provence, who were looking at Marseille’s attempts to join the race, explained the Saints had been ‘very close’ to sealing a deal for the Frenchman, only to then move onto something else. 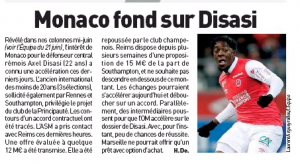 On Thursday, L’Equipe have an article about a €12m bid from Monaco, which was rejected by Reims.

They then claim Disasi’s club have, ‘for a number of weeks’, been sitting on a ‘€15m offer from Southampton’, and ‘don’t wish to go below that amount’.

In fact, they even state ‘exchanges could accelerate today and result to an agreement’.

This backs up previous claims the Saints had been ‘negotiating for several weeks’, and were able to meet Reims’ demands.

So, we’re not sure if L’Equipe originally got Wolverhampton and Southampton mixed up, or if Disasi simply said no to a move to Molineux, but either way, that’s the latest from France on the subject, and Ralph Hasenhüttl’s side seem to be in a good position.