Now Director of Football at AS Monaco, he worked with the Saints for three years, taking charge of the club’s scouting and recruitment. From there he moved to Tottenham, and then ended up working for the Red Bull group, before taking up his role in the French principality.

Sunday’s edition of L’Equipe reports Mitchell and Monaco are keen on signing Axel Disasi from Stade Reims… and so are Southampton.

The Premier League club have been linked previously, and it’s now claimed they’ve been in negotiations ‘for several weeks’, and are able to meet the price tag requested.

Rennes are also keen, however, they’d have problems paying the €15m required. Wolves have been ‘following’ the situation, although their interest isn’t presented as seriously as 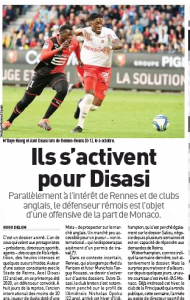 Disasi is a 22 year old central defender, who can also operate at right back. His contract lasts until June 2021, putting Stade Reims under some pressure to sell this summer if they can’t get a renewal.

Watford forward has ‘landed in club’s sights’ – Impressed by versatility...

Chelsea and Man City set to have new meetings for signing...