The England international may be tempted to leave the club to get more first-team football opportunities in the new year, and Fotomac report Besiktas could offer him that chance.

According to the Turkish newspaper, Besiktas’ transfer committee will hold talks with Sturridge in the coming weeks and the 29-year old also will speak with Liverpool about his situation.

It’s claimed Besiktas are looking to sign Sturridge on a cut-price fee because the player will become a free agent at the end of the season.

The Turkish club are in need of a goalscorer ahead of the second half of the season and it seems the Liverpool man is an option. The Super Lig club have lost Cenk Tosun and Alvaro Negredo in the past 12 months and have made it their priority to bring in a No.9 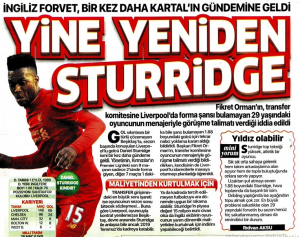 Sturridge has made 15 appearances for Liverpool in all competitions this season, scoring 4 goals.