Still in search of a midfielder following their failed efforts to sign Granit Xhaka from Arsenal, AS Roma are struggling to decide between two players.

Those are Denis Zakaria, currently at Borussia Mönchengladbach, and André Frank Zambo Anguissa, contracted to Fulham in the Championship.

The Cameroon international has only featured for 77 minutes spread over three of the first four games of the season, and the general feeling is he would like to leave Craven Cottage this summer if possible.

That’s where AS Roma come in, with it reported by Corriere dello Sport that Tiago Pinto, the club’s general director, ‘has had several contacts with the agent of Zambo Anguissa’, whose contract with the Cottagers expires in 2023. 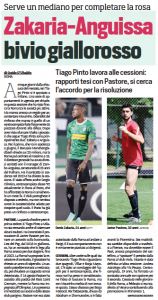 Furthermore, as has been previously reported, the player ‘has asked for the sale’, perhaps explaining why he has been used relatively sparingly by Marco Silva so far.

The Portuguese manager has admitted he’d like to keep Anguissa around if he could, but we all know that if José Mourinho comes calling, few can resist the temptation.